but you’ll find no treasures here …..

A shipping container spotted bobbing up and down in waters off the Queensland coast has finally washed ashore.

Paint peeling and with barnacles crusted on, the Maersk container washed ashore on Moreton Island early on Tuesday.

There’s red and white tape across the door, and the words “keep out” have been spray-painted on it.

As for its contents, there are no great treasurers here. 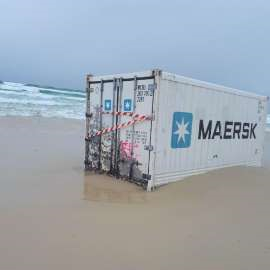 “Maersk Line can confirm that an empty Maersk container has washed up on Moreton Island,” a Maersk spokeswoman said.

“Maersk Line takes our commitment to the environment extremely seriously and will bear full responsibility for removing the container.”

The spokeswoman said Maersk moves 17 million containers around the world, losing very few of those annually.

“In 2016 we lost five containers overboard,” she said.

“From 2000 to 2016 we lost an average of 57 containers per year — however, more than half were lost in a single incident, the Svendborg Maersk in 2013, where 517 containers were lost in the Bay of Biscay in a hurricane.

“The container in question will be removed by barge to Fisherman’s Island to our container depot.”

The spokeswoman was unable to confirm where or when the container was lost.

The container was spotted about 30 nautical miles north-east of Mooloolaba on the Sunshine Coast over the weekend.

Australian Maritime Safety Authority (AMSA) said it may have also been spotted earlier this year.

“On January 22 this year, AMSA received a report of a container with similar markings, adrift approximately 650 kilometres off the Queensland coast,” an AMSA spokesman said.

“Given the distance offshore and time since the recent container sightings, AMSA cannot confirm whether this is the same container.”

The spokesman said AMSA was working with Maritime Safety Queensland and the Queensland Parks and Wildlife Service to ensure the container was removed safely.

‘Yachts have been known to hit them’

He said most containers simply sank to the bottom of the ocean floor, never to be recovered.

But Mr Asher said sometimes empty ones could “float for a considerable time”, posing a hazard to mariners.

“Yachts have been known to hit them, they can tear the hull out of it and capsize or sink a yacht,” Mr Asher said.

“They are a recognised hazard, but whales represent an even greater hazard.”

It would be near impossible for treasure hunters to drag a floating container to shore to search inside for its riches.

“They weigh about 20 tonnes if they are fully laden, you would need a tug boat to do that,” Mr Asher said.

View all posts by admin →

This site uses Akismet to reduce spam. Learn how your comment data is processed.